My Little Pony returns with an episode bringing back the season’s semi-main focus: Twilight training Starlight Glimmer in the ways of friendship. This character arc has been pretty good, even though redeeming Starlight in the first place was a questionable decision. “Every Little Thing She Does” isn’t a fantastic episode nor a particularly mediocre one either.

Starlight Glimmer is excelling at her magical studies with Twilight Sparkle, but she has been avoiding her friendship lessons. Feeling pressure to impress her teacher, Starlight attempts to tackle several friendship problems at once.

The episode begins with Twilight in a magic training session with Starlight. This was a fun sequence because we got to see the two in a kind of sparring practice. The main story starts when Starlight sets out to complete all of her friendship lessons at once. Based on the description it seemed like the plot would have Starlight go around Ponyville attempting to complete these friendship quests somehow at once. Instead of going that route however, the writing went in another direction. Sadly, this is where the episode falters.

The story wants us to accept that Starlight is totally okay with using spells to cheat her way out of completing the lessons. It can argued that she didn’t mean to mind-control the ponies, but once she saw what the spell had done, she decided to keep going. Yes, it’s shown she has grown desperate to complete the lessons, but she nonetheless appeared unreasonable throughout the middle act.

The message at the end is the best part and makes the episode slightly above average. Starlight states she’s afraid to do projects with each of the Mane 6 because she’s worried she might not be good at them. Twilight tells her that it’s not about the project; it’s about getting to know the person (pony) more. It’s about the company. This is especially true in real life. If for example I asked my hypothetical future wife to play a game of Super Smash Bros. with me, I wouldn’t be asking because she’d give me a challenge. (This is assuming of course that she wouldn’t be into the game.) I would ask simply because I like her company. We sometimes do things we’re not into/good at for the other person, whether it be to get to know him/her better, out of love, or simply for the company. 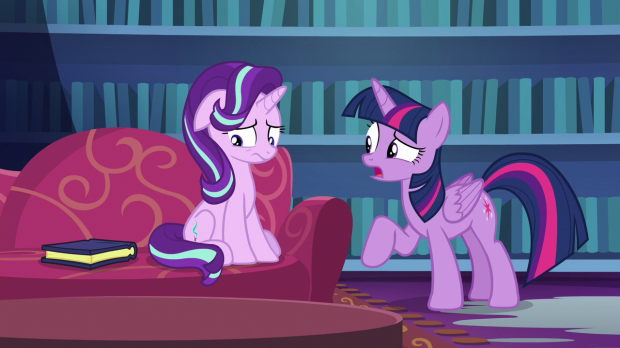 Overall, “Every Little Thing She Does” is a standard episode made better by the excellent delivery of the message at the end. With a better middle act, we could have had one of the best of the show.

“The Times They Are A Changeling” (try saying that in one gulp) is finally an “important” episode. Now, this is not to say that every episode of My Little Pony has to be “important” in the sense that it furthers certain plot developments or establishes a new status quo. Slice of life stories is the show’s strong suit, and something the first two seasons in particular excelled at. The reason why I used the word ‘finally’ is because the last few episodes have been more on the mediocre side. The writing just hasn’t been quite up to the usual standard. The latest installment fixes this. It’s not a perfect episode but it’s definitely leagues ahead of what we’ve been seeing.

Spike travels with Twilight and Sunburst back to the Crystal Empire to visit Flurry Heart, only to discover that the entire Empire is in a panic due to the reported presence of Changling spy.

Maybe the comics have spoiled me, but I couldn’t help but think how cool it would have been if the lone Changeling had been the prelude to a grand invasion. The first act with the Crystal Empire being worried that the Changeling could be anyone was greatly effective. Of course, the overall point of the story isn’t one of grandeur. It’s meant to convey yet another message of friendship, though this time with a different backdrop.

The main idea of the story is lineage, or one’s association. The Changelings in their appearance way back in the epic “A Canterlot Wedding” appeared almost as mindless drones. When one thinks of a Changeling, it’s associated with the sinister Queen Chrysalis. Therefore, if one of them were to appear, everyone would think the worst. But what the episode conveys is that one shouldn’t be judged on lineage or a stereotype. The son of a killer for example shouldn’t be judged on association. Just because he’s related to a criminal doesn’t mean he has to be a criminal as well. Thorax’s (the lone Changeling) plot was engaging. The flashback to ‘Wedding’ was very effective since we got to see things from his perspective. 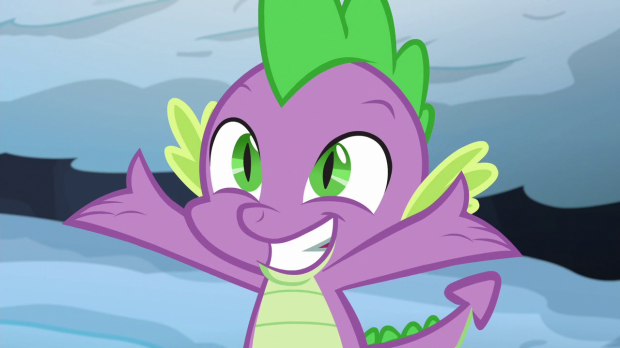 Spike’s role this season has been his finest. All of his prior development finally transformed him into one of the show’s most engaging characters. He was pretty solid here mostly. The inhabitants adoring him and his giving orders to the royal guards was a bit on the silly side. Also, instead of approaching Shining Armor about Thorax, why didn’t he confide in Twilight about the situation? Some of the happenings in the middle act could have been avoided. With that said, there’s some very powerful moments. The viewer can see the sadness on Thorax’s face when the only friend he’s ever had doesn’t stick up for him. Spike going back and making it right was excellent & great character development for him. The climax song was fantastic. Cathy Weseluck had never gotten a full-length song to herself before, so hopefully starting here we’ll hear more with her.

Overall, “The Times They Are A Changeling” is a very solid episode. It packs fantastic emotion and a quality message which unlike the last couple weren’t at the expense of character development. Aside from a few annoying moments here, Spike continues to be a great product of the latest season. The writing duo of Kevin Burke and Chris Wyatt deliver a winner.

Today’s episode of MLP is a bit on the sad side. It’s not because it’s extra emotional, but that it marks the final one until later in the year. Mid-season breaks are always disappointing, but good in a way as well. (The wait between seasons are shortened.) So today is a farewell installment for now. Interestingly, the story brings back the Friendship Map, which hasn’t been seen since the Season 5 finale.  This time, the Brave and the Bold duo is Rarity and Pinkie Pie. Michael Vogel wrote the superb “A Hearth’s Warming Tail,” so “Spice Up Your Life” was in good hands. This episode was definitely a much better one than what we’ve seen these last few weeks.

Pinkie Pie and Rarity are called to Canterlot by the map to solve a friendship problem. They discover a father and daughter whose relationship is strained as they struggle to keep their restaurant open.

What’s interesting about the Friendship Map is that it picks two ponies for a specific job. It’s not random; rather it picks them knowing their specific traits will be the best way to help fix a problem. Rarity and Pinkie Pie have never really had the focus on them together, (besides “The Gift of the Maud Pie,” though Maud took away from that focus) so that alone is enough to be extra interested in “Spice.” The two play off each other well throughout. Rarity is more fancy, looking for 3 star review restaurants, while Pinkie doesn’t care about stuff like that and just wants to eat good food, even if the place has no reviews. Vogel has a solid handle on their personalities. The action gets really interesting when they journey into a restaurant on the verge of closing down since there’s no customers. (Sort of reminds me of Babu’s predicament in his debut episode in Seinfeld.) 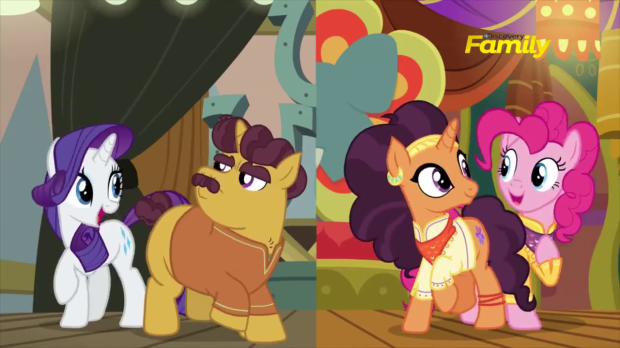 The last few seasons have done a solid job at introducing fun new side characters. It’s particularly pleasing to hear such an amount of attention to the voice acting, something MLP has always excelled in. Saffron Masala was a fun character to have around. The writing does a solid job showing the intense emotion she has because of the disagreement on the restaurant business with her father, Corlander Cumin. He wasn’t quite as fun, but it’s easy to see what the episode was aiming for: showing a disgruntled store owner. For the most part the story succeeds at doing that. What it falls short in however is the character of Zesty Gourmand. Again, it’s easy to see what the writing was going for: a reviewing snob whom thinks her word is law. She was however just a little too exaggerated to take seriously.

Perhaps the most interesting part was how the disagreement between Rarity and Pinkie came about. People have different opinions on how things should be done. In the episode’s context, Rarity believes that in order for the restaurant to get a good review it should try to mimic the ones which have the full three stars. Pinkie on the other hand believes the opposite: the restaurant needs its own unique flavor. The argument between the two was fun to watch. The resolution seemed pretty fast, but also shows that the two friends can move past a dispute and get back to the issue at hand pretty quickly. The song was fun, though it seems the budget may have ran out since it reuses the same scene three times over.

Overall, “Spice Up Your Life” was a fun team up adventure. At its core, it’s about Pinkie and Rarity helping out a struggling family business. There’s nothing particularity negative about it, other than Zesty. The other new characters, especially Saffron, are good. It’s not a masterpiece, but still a nice watch on a Saturday afternoon. These duo episodes are some of the most entertaining in MLP.