In Search of the Lost Future incorporates quite a few genres. It is part slice of life; the episodes can have an episodic feel at times. But, it also has an ongoing storyline that runs seamlessly for most of the 12 episodes. It is part romance, and even science fiction. It combines these genres exceptionally well to tell a story that is engaging, emotional, and humorous.

It’s not perfect though. The ending is unfortunately disappointing, forcing the review to shave off a star. Some shows and movies are consistently mediocre, guaranteeing a mediocre score. Meanwhile, some things are perfect, but the ending wrecks the experience. (An example of that is the film, Puella Magi Madoka Magica the Movie: Rebellion.) In Search of the Lost Future is fantastic, but the ending does not feel like a satisfying culmination of all that has come before. It is not drastically bad as in the Rebellion example, however. Lost Future is nonetheless a very solid anime. Its primary positive is the factor that helps secure a very good rating. What is that factor? It features an incredibly likable core group of characters.

To briefly summarize the story: Sou lives with his childhood friend, Kaori. They are part of a school club called the Astronomy Club. The group is a close-knit friendship between five members. We have Airi, Nagisa, and Kenny. Things take a turn for the interesting when Sou finds an unconscious girl at the school. This girl, named Yui, does not remember her past. It later turns out that she is an artificial intelligence sent from the future by an older Sou to change the fate of Kaori, whom is in a coma due to getting hit in a bus crash. Kaori is in love with Sou, who is oblivious for most of the story. If Kaori tells Sou her feelings, what will his answer be? And can Yui save Kaori from an eternal coma? 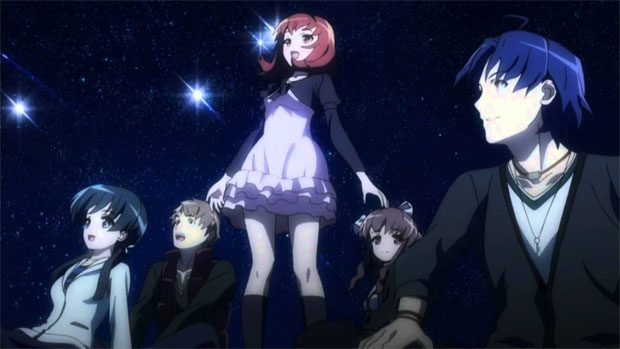 You’ve probably seen some shows where characters have a certain trait, and that’s it. They don’t have much actual personality aside from one core trait. (This is seen in Dragon Ball Super with Vegeta.) Not too long ago, I wrote a review for the anime, Karneval. It was decent. but nothing spectacular. The characters were more on the mediocre side. The protagonist of that show had attitude, but not much actual character apart from it. This is not the case with In Search of the Lost Future.

Take Airi for example. She is the tough one of the group, whom makes sarcastic comments to Sou quite often. But, she has a lot more character than just being the tough girl. She’s incredibly down to earth, such as when she consoles Kaori late in the story. It’s obvious that she cares about her friends, and is passionate. When another member pushes Kaori, Airi goes on the offensive and attacks the person. Airi also likes Sou, but keeps it to herself because she knows that Kaori is in love with him. The viewer does feel sad for Airi, but at the same time admires her for her ability to put that to the side for Kaori’s sake. Next we have Nagisa. She was fantastic, and gets some intriguing backstory later in the story. One of the best scenes of the show was when she barges into the computer group’s room, and beats a program they were working on.

Sou and Kaori are likable focuses. In Kaori’s case, the writing is once again down to Earth. The bus accident early on was felt. Yui is interesting, and she takes an even more central role later in the story. Of course, her goal is to save Kaori. But, as Yui later learns, doing that will erase herself from existence. This is an intriguing plot point that engages the viewer.

The dialogue in this anime is really good. The character interactions are almost always fun and engaging. There’s plenty of humor, but also heart-to-heart. These are true friends, and it shows in the words and actions. Simply watching them interact at the mall made for a fun episode.

The core characters are good, but Kenny had the least development. His running gag can be funny, but outside of that and his love of food, he didn’t have development. Still, he’s not terrible. It’s just that every other core character got personal scenes – Kenny got none. That’s not a big negative. The big negative, as stated earlier, is the overall ending.

Sou ends up rejecting Kaori in favor of Yui. (Sou has no idea that his future self created Yui for the purpose of saving Kaori.) But Yui ends up vanishing, thus erasing herself from the past timeline. So, Sou’s reason then for rejecting Kaori is that he can only see her as a childhood friend. It’s disappointing, especially during the original rejection. Sou liking Yui over Kaori was unneeded. Kaori does end up waking up in the future, so you could say it’s a happy ending. But, the conclusion just isn’t satisfying because Sou doesn’t reciprocate Kaori’s feelings, and he seemed to prefer Yui, an artificial creation.

You may argue that if Kaori and Sou did showcase romantic feelings for one another in the end, it would have been a generic ending. But generic is not bad in this case. The show builds up to that particular ending, and the way it does so makes that conclusion the only satisfying one. What we got does not do the story justice.

In Search of the Lost Future is a near perfect anime affected by a mediocre ending. It’s still very good, earning itself a positive score. The core characters are excellent, I would even say some of the best. The story moves at a good pace, blending slice-of-life with ongoing plot. The ending does ruin the enjoyment a bit, but it isn’t terrible to the point that the viewer forgets how great everything else is. As such, Lost Future is not one of the all time greats, but still a very good watch.

One thought on “In Search of the Lost Future Review”