The Mario franchise is no stranger to different genres. Platforming is what the series is known for, but there have been many different types of games. There have been sports, RPGs, and even a dancing game on one occasion. Despite all this however, I don’t think many expected Mario to feature in an XCOM-style adventure. That’s the case with Mario + Rabbids: Kingdom Battle. This game was a surprise when it was first announced. Not only is it the hero’s first foray with this kind of battle style, it’s also Mario’s first new game on Nintendo’s latest console, the Switch. Kingdom Battle delivers something special. It’s a unique, fun and sometimes quite challenging game that brings the heavily strategy-based XCOM gameplay into the colorful worlds of Mario and the Rabbids.

The story begins with the Rabbids warping into a human girl’s home. It’s a shame the story never went back there because she being a Mario fan was quite meta. Anyways, the Rabbids eventually warp to the Mushroom Kingdom. Because of one Rabbid’s fiddling of a helmet capable of merging, the Kingdom is now out of whack. Now Mario, the Rabbids and a few other Mushroom heroes go through four worlds to fix the Kingdom. The story is fun and engages the viewer from the start. Of course, part of that enjoyment is going to hinge on the Rabbids. Kids will probably like them, but for older players they can become jarring. Thankfully, the Rabbids never become overbearing. (I’m still wondering why we didn’t get Mario + Rayman instead.)

As fun as the story is, the gameplay is the primary winner here. Chances are if you’ve never played XCOM before, Kingdom Battle might look complex. Kingdom Battle’s gameplay however is quickly understood. By the end of World 1, the player is confident to press on. What makes this style of gameplay truly great is the amount of strategy it requires of the player. Players must make decisions on which weapons to use, which special abilities to implement, (should I heal my guys or make their weapons stronger?) which skills to upgrade, and how to use the environment to their advantage. One example is a battle that featured a Chain Chomp stage hazard. Eventually I figured out that I should use the Chain Chomp to my advantage. Another example of careful strategic planning is a battle that features an environment that circles around. The enemies featured here are mostly powerful Smashers, which do a large amount of damage. They however do not move very far; so players have to carefully maneuver and then attack them.

As one can see, there’s quality strategic play at work in this game. Sadly, quite a few battles are on the easier side. It’s understandable that Kingdom Battle works as an accessible point into the XCOM world, but more battles could have been given a slightly harder push. With that said, the game does feature quite a few genuine challenges that forces players to carefully evaluate their losses and come up with new strategies. When it’s hard, Kingdom Battle is a masterpiece when it comes to strategic play. The final boss heals himself twice, and makes the player ask the questions, “Should I concentrate on the minions and then focus on the boss, or focus all firepower on the boss? Can I do both?” The boss battles are diverse, from Rabbid Kong’s shockwaves to having to turn off the spotlight on Phantom of the Bwahpera. 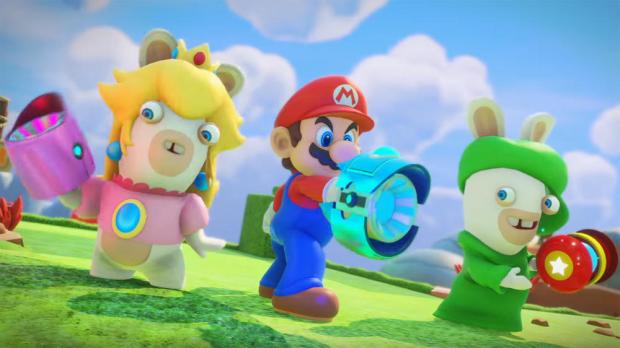 To switch things up, the gameplay sometimes features “get to the goal” battles. Instead of fighting enemies, the objective is to get to the appointed yellow area. These were a nice change of pace. It especially gets interesting when you have to escort a non-fighter, such as Toad, to the goal without that character being depleted of his/her health.  While battles are the primary part of the game, you will spend a good amount of time exploring the maps. Here Mario and friends go from level to level often looking for secret areas that can yield artwork, new weapons, and other nifty things. You will also solve puzzles of varying difficulty. They are not a bad way to keep that strategic thinking going between battles.

The soundtrack is wonderfully orchestrated. From the tension-filled ‘Into the Pit’ to the epic ‘Bowser Returns,’ the music in this game is well done. It’s a shame there weren’t many Mario remixes, but since this is a crossover game, it makes sense the soundtrack wouldn’t be 100% focused on delivering Mario-specific themes. There are four worlds to trek through. That sounds like a small number, but each world has nine main sections, and they usually are not short. There are many collectibles to find for completionists. As for multiplayer, there are co-op challenges. That’s fine, but it’s shocking that there isn’t a versus mode. How fun would it be to challenge a sibling or friend whom has come over for some strategic play? Ubisoft made a mistake not implementing a competitive mode.

Overall, Mario + Rabbids is an unexpectedly great crossover. The amount of depth to the gameplay is amazing. Many battles you’ll think up different strategies as you see how far an enemy can move. You’ll use the environment to your advantage (while the computers do the same). The characters have diverse weapons and abilities. I personally liked Rabbid Peach’s heal ability and had her on my team. Maybe you will like Rabbid Yoshi’s Gatling gun-type weapon. There are other things to consider, such as skill points, further adding to the depth. More battles with higher difficultly would have been welcome however, and a lack of competitive multiplayer is almost a crime. Despite those things, Kingdom Battle is definitely worth a look, whether or not you’re familiar with XCOM. If you’re not familiar, this game will give you an appreciation for it.