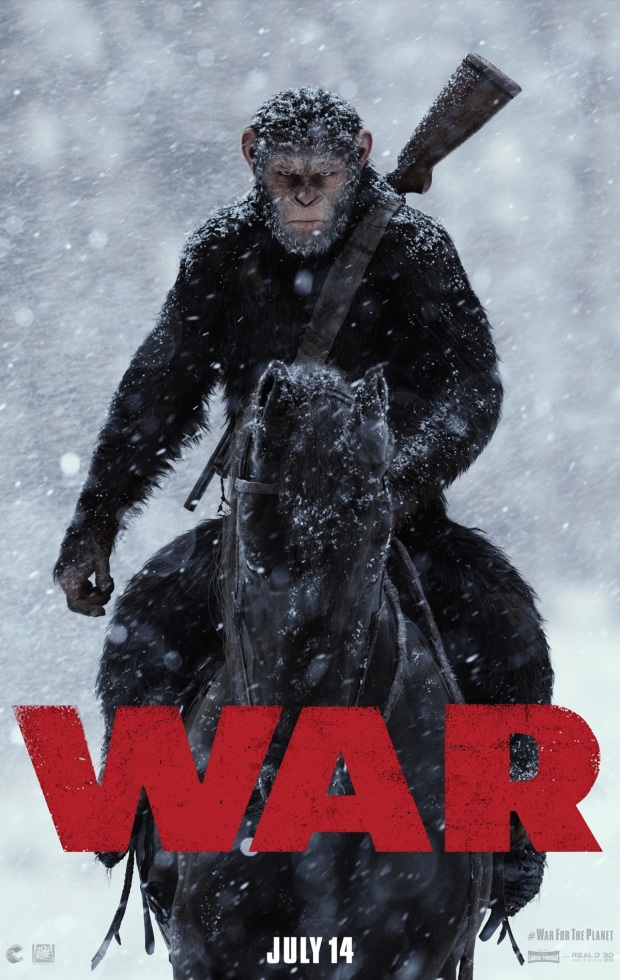 In 2011, the Planet of the Apes franchise was revived. Rise was a reboot, but also a prequel to a new series. Modern effects would allow more realistic apes than what was seen in the original films, and in Rise, we got to see some of the best effects of a modern blockbuster. The film was followed by Dawn of the Planet of the Apes, and to quote my review from it, it “is one of the finest movies of the century.” Caesar was already fantastic in Rise, but in Dawn his character was further cemented as one of the greatest of 21st century pop culture. War for the Planet of the Apes gets Caesar even further by making him and his ape companions the full-fledged protagonists. There’s no main human protagonist (aside from Nova) this time around. This works, because Caesar is an incredible character, and the other apes are great as well. They can easily hold a film together. War has many of the things that made its predecessors good films. It’s incredibly well written and provides a fine closure to a fantastic trilogy.

The opening scene makes sure to remind the viewer that this is a war. It’s a tension-filled sequence as we see the soldiers plan to attack the apes in the forest. Then, when the soldiers make an explosion, everything turns into chaos. It’s exciting when the apes rally to defend the woods. This opening scene grabs the viewer’s attention right away. It’s brutal as we see apes and soldiers getting killed from bullets and spears. After the battle, we’re shown Caesar deciding what to do with a traitor ape by the name of Red/Donkey and the soldier survivors. This is Andy Serkis’ best portrayal of Caesar yet. Every scene he’s in is Oscar-worthy.

Perhaps the core story is Caesar’s mission to take out The Colonel. It’s interesting because in a key scene, Maurice tells Caesar that the latter is starting to sound like Koba. This was a greatly written scene. Koba was the antagonist in Dawn, and in War Caesar at times “sees” Koba, showing that the rogue ape still haunts. Caesar’s journey, outward and inward, is engaging. He isn’t a one-dimensional hero. He fights to defend the apes, and goes through development after being hit with the realization that Maurice’s words are proving to be true. Caesar has easily become one of the greatest film franchise characters ever to be created.

As stated in the first paragraph, the apes can hold a film together. Each of the main ones are given personality, from Maurice being the soft observant one to Donkey being a loyal Koba follower. War introduces one new major ape protagonist, whom comes toward the latter part of the film. “Bad Ape” is actually the main negative why War isn’t the perfect film Dawn was. Dawn was a serious film, and arguably War should be even more serious. Bad Ape provides comic relief, such as saying “I’m okay” after tripping on something off screen. It just seemed like he was there to provide humor in an otherwise perilous story – but was it really necessary? I don’t think so. For an example backing up that standpoint, we have a scene where Bad Ape doesn’t know how to use binoculars. Then it cuts back to The Colonel’s ape prison. It goes from comedy then back to a serious situation; it just doesn’t mesh well. The tone change is abrupt and jarring. Ultimately, Bad Ape didn’t contribute much to the story and could have been left out of the script. 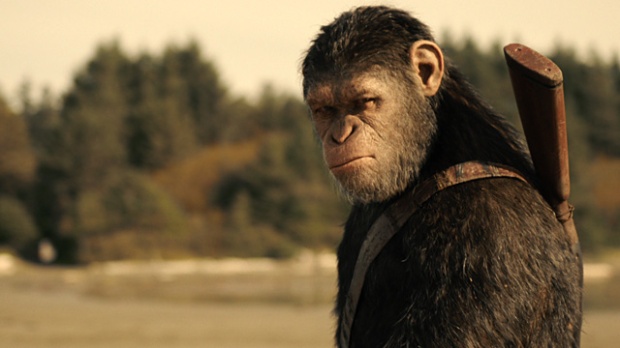 The primary antagonist is Colonel McCullough. He’s no Koba, as The Colonel is more of a textbook villain. But to call him generic would be a disservice as well. His scenes with Caesar throughout the final act were especially interesting to watch. As stated earlier, there’s no human protagonist driving the story forward. However, there is a human character whom the apes pick up. A little girl whom is later named Nova, she was a good character to have around. Despite not being able to talk, she displayed great emotion.

The lead-up to the climax is almost as exciting as the climax itself. Seeing the plan to escape was engaging. Then, the final battle provides an epic action sequence that won’t soon be forgotten. However, while the explosions are grand, it’s the different characters’ decisions that make the final act so memorable. From Caesar’s last encounter with The Colonel, to Donkey’s grenade gun, there’s so much emotion conveyed in these fantastic scenes. The soundtrack is particularly strong as well. The final scene provides a genuinely emotional ending to what will go down as one of the best trilogies out there.

Overall, War for the Planet of the Apes is a great film. Though not perfect like Dawn, just about everything works. Caesar is outstanding once again, and is given more to do. The action is very good, but it’s the interactions with the apes that truly make the film stand out. The themes of mercy and leadership are there, as Caesar has to make a choice of whether to be like Koba or not. The different ape characters are great, aside from Bad Ape. The emotion the different scenes convey is amazing. Who could forget Luca grabbing a flower from a tree and putting it on Nova? With a memorable final act, War concludes Caesar’s journey with excellence. Though there could be more Planet of the Apes films, War provides fine closer to the story set in motion in Rise. 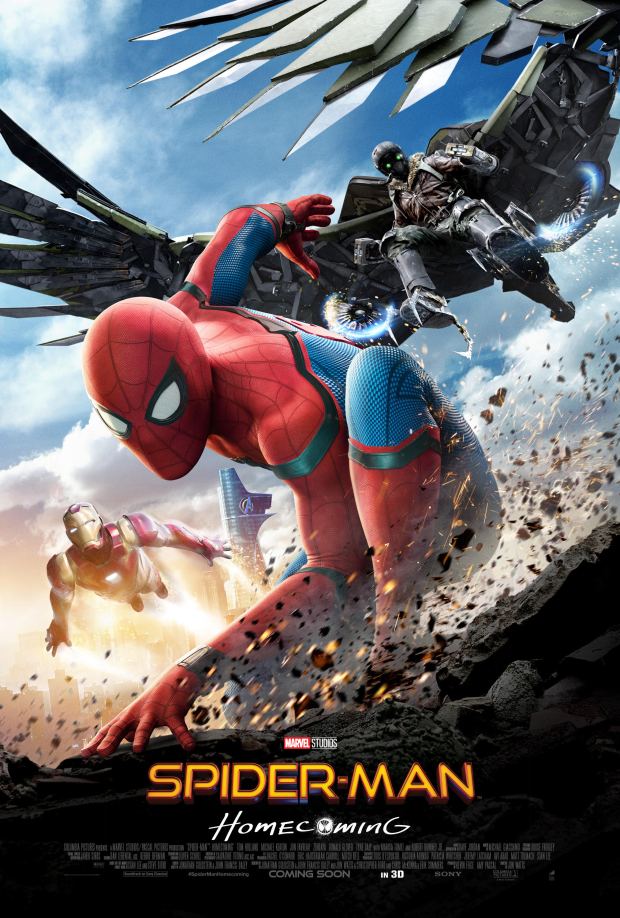 We are living in quite an interesting era for the comic book film landscape. Spider-Man got his first film all the way back in 2002, 15 years ago. When Marvel launched their Cinematic Universe, the idea of the Webhead fighting alongside the Avengers was nothing but fan fiction at that point. But, in an unprecedented event, a deal between Sony and Marvel allowed Spidey to join the MCU. He debuted in Captain America: Civil War to critical acclaim. To put it simply, it was surreal and a dream come true. Now here we are with Spider-Man’s first solo outing in this continuity and also his fist solo outing since 2014’s The Amazing Spider-Man 2. So, with all this pre-hype excitement out of the way, the question has to be asked: Is Spider-Man: Homecoming the best Spidey film yet? It is not, but Director Jon Watts’ film is still fun from beginning to end.

The opening act takes place eight years ago, during the aftermath of the Chitauri Invasion. It’s an interesting way to set up the story, and in this case it’s setting up Adrian Toomes’, (known to comic fans as the Vulture) rise to villainy. I’m all for antagonists getting this kind of treatment in the beginning (and we all know villains in the MCU need to be better) but there’s something hammy to Michael Keaton’s portrayal in this first act. It takes a bit before the Vulture becomes an engaging character. It’s interesting when he brings up how rich people like Tony Stark rule, while working people like him have to eat off the scraps. It’s a solid motivation for him; it’s a shame the writing didn’t do a better job developing that in the beginning. To give some credit, Toomes has some good scenes toward the climax. In the end, Vulture doesn’t solve the ongoing problem of mediocre villains in these films, but he’s a step above villains like Darren Cross and Malekith. As a bonus, the suit design is genuinely menacing.

Of course, the primary reason why one would watch this is to see Spider-Man. For some, this is the first time seeing Spider-Man on the big screen. For others, this is the second rebooted Spider-Man film. Either way, I believe most will be satisfied with Tom Holland’s portrayal of the famous character. Holland portrays this energetic young Peter Parker well. Some particularly strong scenes are when he busts the fake Avengers robbery and when he tries to save the Staten Island Ferry. The writing does a good job bringing the story to street level. An example is the montage early on with Spidey helping the common citizen. (There are plenty of humorous scenes throughout the film, but my favorite comes from this montage – the brief clip of Spidey giving an older woman directions.)

Tom Holland’s portrayal is mostly great, but it can border on the annoying side in a few instances. The video clip early on for example was a bit much after awhile. Also, if one is used to the more adult incarnations of Spider-Man, it could be tough getting used to this 15 year old version. But, I think it’s possible since the writing does a solid job at making this about him discovering how to be a mature hero. One of the most powerful scenes was Tony taking away the Spider suit. Peter claims he’s nothing without the suit. Tony replies, “If you’re nothing without the suit, then you shouldn’t have it.” Speaking of Tony, Robert Downy Jr. steals the show every scene he’s in. He doesn’t appear too much, which would have taken the spotlight away from Peter. Iron Man appears for just the right amount of screen time.

There’s plenty of fun, fast-paced action. Though, there’s no truly notable battle sequence. Yes, the climax finally featured Spidey dealing blows to the Vulture, but before that the fight scenes were mostly brief. You won’t walk out of the theater saying, “Wow, that was one great action sequence.” Some of the more well done action pieces weren’t fights. The scene where Spidey breaks into the Washington Monument and the one where he attempts to hold the Ferry together were intense. Also, I’m sure longtime fans will appreciate seeing a famous comic scene adapted near the climax. (Personally, I think that particular scene would have been better saved for a future film.) The soundtrack isn’t bad, though not too memorable outside a couple of themes. 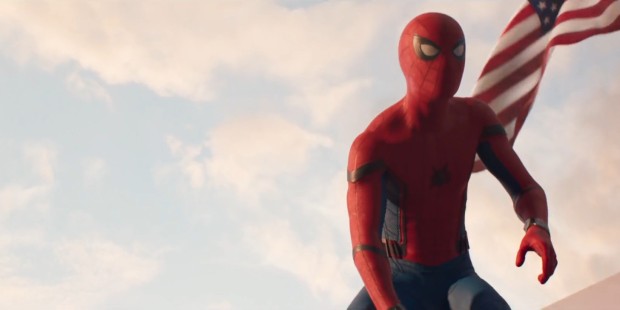 As for the other characters, the most major is Jacob Batalon’s Ned. He was fun to have around; he worked well as a friend and later “guy in the chair” for Peter. Laura Harrier as Liz wasn’t bad. She wasn’t much besides a love interest for Peter. But, to give some credit, she wasn’t devoid of personality. The romance angle wasn’t terrible. In the end, it doesn’t really go anywhere, but without it, it would have been hard to have the well done car scene with Toomes. Zendaya as Michelle was one of the most interesting characters with her unique, quirky personality. It looks like the writing has plans for her in future installments, which is good. Out of all the supporting characters, ironically the standout wasn’t a human – it was Karen, an A.I. built into the Spider-Man suit. One of the best scenes is when Spidey talks with her while being stuck at a base. Oh, we can’t forget Marisa Tomei’s Aunt May. The writing really tries to make her the complete opposite of the original trilogy’s May. It mostly works, but the last scene went a little too far.

Overall, Spider-Man: Homecoming is a solid addition to the Marvel film library, Tom Holland’s energetic outing in Civil War takes the center focus here, and it’s mostly well done. As he should be, Peter is portrayed as an upbeat kid. At its core, the story is about Peter becoming the hero we’ve seen throughout the years in comics. When Tony takes away Peter’s suit, Spidey is forced to reevaluate himself. The Vulture is a decent enough antagonist. There’s enough solid material to avoid calling him a mediocre villain. The action is fun, but it feels like there should have been one more important fight scene. But, despite any negatives, Homecoming remains an engaging watch. By the end, it makes the viewer anticipate Spidey’s future appearances.