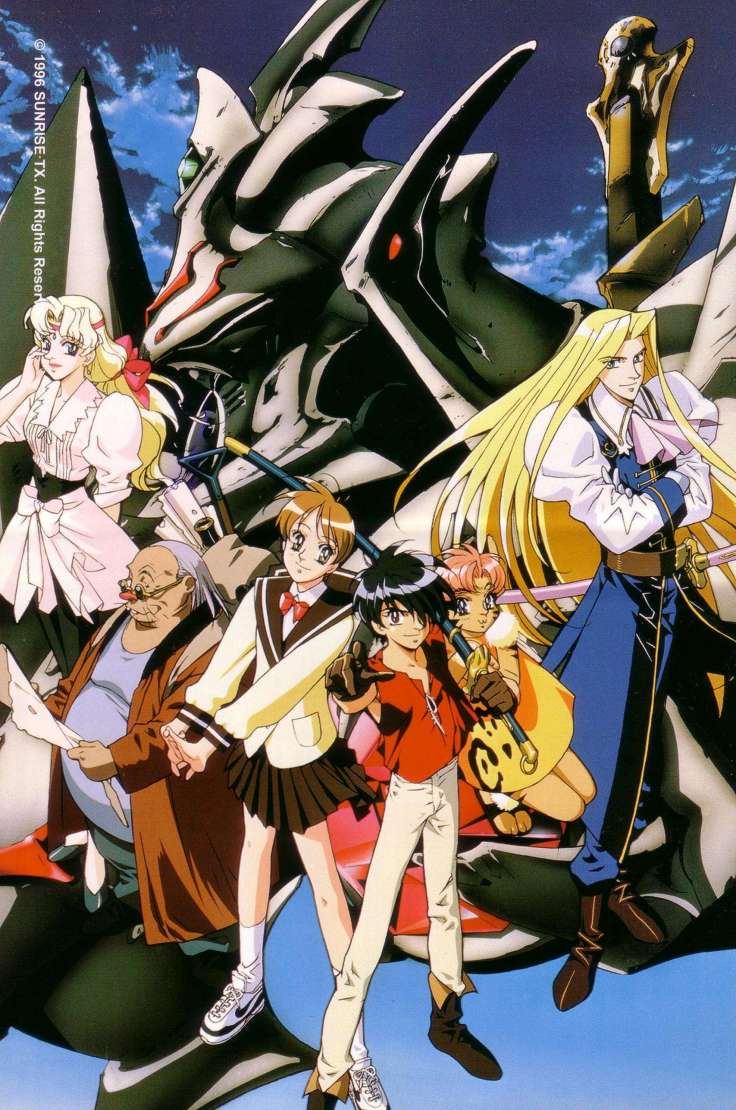 One of the best things about The Vision of Escaflowne is how it merges different genres. Mechas play a substantial part, but even more so the fantastical and philosophical themes. Romance also plays an important part throughout the 26 episodes. Though it’s not 100% perfect, Escaflowne succeeds in many different areas. The writing is almost always on point and the characters are nicely fleshed out. For those that appreciate grand action scenes, the anime delivers. The aspect this reviewer most appreciates is that the show has an atmosphere of nobility, much like Kenshin.

The Vision of Escaflowne follows a teenage girl named Hitomi. The core of the story is focused on another planet named Gaea, where Hitomi is mysteriously transported. It’s here where we learn that an empire called Zaibach is set on taking over. The first episode does an excellent job setting the stage for what’s to come. Hitomi is introduced as a normal, kind character who likes to run in the track races at school. The episode’s tone shifts drastically when a guy by the name of Van appears through a blinding light. The next part however is where viewers get a sense of the tension the story is going to have moving forward: the arrival of a dragon. There’s a great sense of danger as Hitomi and her friends try to adapt to this situation. The battle between the dragon and Van is exciting. The dragons in this show aren’t canon fodder, which is refreshing.

Episode One could be called a prelude, because it’s in Episode Two where the main story begins to take focus. Gaea is an interesting, fantastical setting, having a Medieval look. Van is introduced as a bit of a hot shot prince, which makes for an interesting dynamic with Allen Schezar later on. Allen’s introduction is handled marvelously, and he remains a great character as the show continues. Escaflowne does a good job giving its characters importance, from Princess Millerna’s medical training to Drydan being able to help rebuild Escaflowne.

Allen is a great character, but in the second half the writing doesn’t use him as well. This is primarily because of the forced romance triangle between him, Van, and Hitomi. Allen professing his love for Hitomi didn’t seem earned at that point. The show didn’t need to have this romance angle. It’s not the worst written triangle, but it can be a detractor in the show’s second half.

As for Hitomi herself, though she doesn’t participate in the fights, the writing is careful not to make her just a weak bystander. Her kindness and ability to see the good in others is prevalent throughout. One of the most powerful scenes was Hitomi offering Naria grace, despite being kidnapped by the latter. The themes of kindness, love, and redemption are there throughout the show and it’s usually thanks to Hitomi. This makes her an engaging protagonist, despite never really being in the heat of battle.

Zaibach is an intriguing antagonist. Folken is their military captain and one of the show’s best characters. He is also Van’s brother, providing a very personal conflict for throughout show’s first half. Dilandau makes for an interesting foil to the rather serious Folken, being more of a crazed fighter. Later there’s a huge plot twist with Dilandau, though it’s bizarrely explained. Zaibach’s leader, Emperor Dornkirk, is interesting. Much of his dialogue is a bit on the meta side, dealing with “controlling and altering fate.” This provides a grand, philosophical (though sometimes vague) conflict throughout the show. The final episode with most of the armies going at each other because Dornkirk says this is truly what humanity wants was intriguing. Also as intriguing was how true love can put an end to violence. It’s a great message, though Dornnkirk fading away was a bit anti-climatic.

Overall, The Vision of Escaflowne is a quality anime. From its fantastic soundtrack to epic battle scenes, the anime is worth watching. The characters are great. From the main characters to secondary characters to characters who only appear for a few episodes, they are all handled well. The subplots and backstories enhance the story, an example being how Dornkirk was connected with Allen’s father. Though the romance triangle aspect wasn’t needed, it doesn’t take away from how much quality Escaflowne has. It’s one of the great anime fantasy epics.

One thought on “The Vision of Escaflowne Review”