Season One, Part Two of Garo: The Animation arrived on Blu-ray not too long ago. The first half (the previous Blu-ray) was an interesting story set in a medieval-like time period. The concept of demonic monsters called Horrors looking to possess humans and Ultraman-like beings called the Makai Knights combating the creatures made for an exciting tale. It did suffer from a few elements, preventing it from being called “great.” Part Two fixes the primary problems, making it the stronger half. It’s not perfect but still a compelling watch from beginning to end.

Part Two picks up a little after the events of the Episode 12. The ending there had Leon attempt suicide by jumping off a cliff. Obviously, it didn’t work and he’s found by a girl named Lara. She takes him to her quiet farm where Horrors seemingly aren’t a factor. This part lasts about a quarter of the story. Leon in Part One was sometimes not that likable. Starting here in Part Two that changes as he learns to live a simple life caring for Lara and her family. This part of the story is very low-key, but nice as Lara grows on Leon as well as the viewer. It’s here where Leon begins to learn what being a protector is all about.

The first quarter is divided between Leon helping out Lara’s family and back in the Kingdom with Prince Alfonzo and German. The latter is where the action is as Alfonso and German vanquish various Horrors. Interestingly, the two plot points don’t intersect at first. For awhile there was really no main story arc and the show felt almost episodic. This isn’t a bad thing however since two of the primary negatives in Part One, the characters of Leon and German (especially him), are fixed here. There is one negative however from not having a main ongoing conflict. Some of the “villains of the week” were too well written to be confined to one episode. The conflict in Episode 14 was worthy of being a multi-parter. Perhaps worst in being underused was Doctor Fabian, a fascinating antagonist. (He even bested German, but thanks to poor plot reasons the Doctor ended up losing.) These antagonists would have been much better to have around than Mendoza 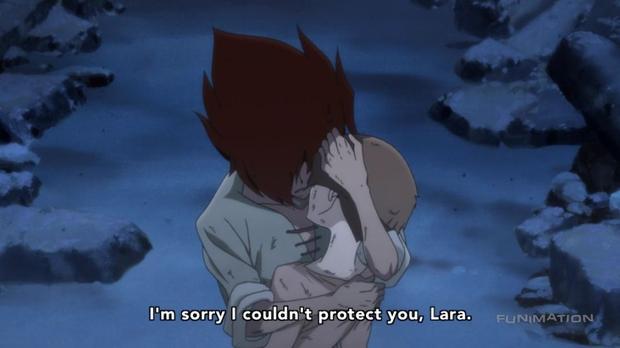 The death of Lara was the turning point of Part Two. It was a very well done, emotional scene. The viewer could see how devastated Leon was. In just four episodes the writing successfully established how kind Lara and her family were. Starting here is when Leon truly steps into his role as Garo, protector of humanity. It was fun seeing him alongside Alfonso taking down Horrors.

It was surprising to have Mendoza be the primary antagonist so soon after being defeated back in Episode 12. He’s still not a great focus, but at least he was more interesting here than in Part One. German plays an interesting role later on. Seemingly sent to protect Mendoza, he “betrays” Leon and Alfonso. What happens next is an excellent, emotionally-charged conflict between father and son. It’s also intriguing because it’s written in such a way that makes the viewer question whether German is actually betraying Leon or not.

The climax has Mendoza gain a new form, which leads to a climatic battle against Leon. The dialogue is my personal favorite aspect of this, because the two characters go back and fourth on ideologies. In the end, Garo showcased what heroism was: willing to put his life on the line to save the world. The final moments inside the black hole were engaging, genuinely emotional, and an excellent way to finish the primary conflict. Unfortunately, this is at the expense of Anima. This monster was hyped in the last few episodes as an all-powerful creature. Yet when it appears it’s quickly dispatched.

Ema had a great role for most of Part Two. Even though she appeared frequently in Part One, she was still a mysterious character. The only thing viewers knew about her was that she was a Makai Alchemist, so it was good to see the show diving into her emotional backstory in Part Two. There’s only one negative regarding her, and it’s a big one. Leon and her have remained friends, with no hint at a romance in Part One. Yet, the writing decided there should be one here. It was unneeded and didn’t make a difference since it’s barely mentioned at all after the one scene. Octavia also has a substantial role, mainly later on. Her complete loyalty to Mendoza still seemed forced, but her character arc was still interesting to watch.

The fights are still great. The CGI when used looked excellent. Just about all of the soundtrack is lifted from Part One, but it’s hard to complain when we have such great themes. The epilogue episode is interesting, though it would have been nice to see what Leon and Alfonso were up to.

Overall, Part Two of Garo ends the season on a high note. Leon is given excellent character development. He goes from the brooding, revenge-filled character of Part One to a heroic protector here. German was a primary negative of the previous Blu-ray, so it’s good to see the writing dial back on his flirtatious personality. Ema was very good and we also got to learn about her past. The romance between her and Leon was a head-scratcher however. Mendoza isn’t going to win any best anime antagonist awards. He’s still better than in Part One, but as stated earlier some of the one-shot antagonists would have been more interesting to have around. Despite that, Garo is a solid anime to add to your library.

One thought on “GARO: The Animation Season One, Part Two Review”