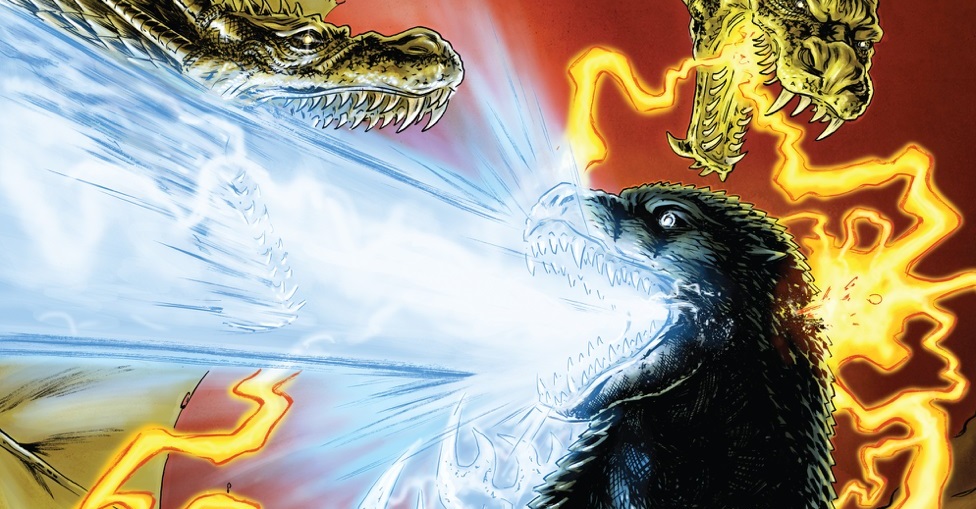 It’s been quite awhile since the last issue of Oblivion. It was supposed to come out last week, but for some reason was delayed. Was the extra wait worth it? Let’s dig into the comic.

Here’s the official description from IDW:

A plan to rid our world of King Ghidorah backfires and the Earth faces certain calamity! A small piece of technology from another world may be the only hope of salvation. 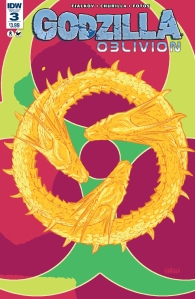 Oblivion has been the definition of an “okay” series. There are some fun concepts but the characters haven’t been that particularly engaging. The artwork also has been more on the mediocre side. Issue Three fixes some of the problems . It opens up with promise: Godzilla shooting a beam at King Ghidorah. What follows is a popcorn fun issue. Sadly, it doesn’t go beyond that and is pretty average in terms of compelling story.

A challenge of mini-series is having engaging characters. There’s so little space to introduce backstories, who they are, etc. It’s not impossible however, as seen in previous Godzilla minis. Writer Joshua Hale Fialkov doesn’t give us any reason to care about the characters here. None of them are particularly likable, and there’s very little development between issues. In fact, there’s anti-development in the case of Yamada. Let’s put this in perspective: in this world monsters don’t exist. We have these crazy powerful creatures roaming around for the first time yet Yamada manages to say the line of, “I could use people like you in my company.” How can this be spoken when there are giant monsters destroying the city? The reactions here just aren’t good. Also, the ending features a plot hole because there’s no way they managed to do what they did in such a short amount of time.

Of course, the primary draw of this issue isn’t the dialogue; it’s the monster fight. People may groan because we’ve seen Godzilla vs. Ghidorah multiple times already, but at least they can admit the fight here is fun. It has excellent usage of beam wars, buildings being used as weapons, and pure fighting. (There’s a really cool panel with Ghidorah literally kicking Godzilla to the ground.) I’m not sure I would call this their best comic book fight, but it was certainly excellent. Brian Churilla’s artwork also improves. It provides a unique  look for the monsters throughout. Godzilla in particular has quite a few standout scenes. The shadowed silhouette near the end also looked really cool. Sadly, once again the humans lacked sufficient detail. There are three covers to pick from this week. The main one by Churilla is certainly unique. Its bright colors are appealing, and the layout is something we haven’t seen before. Cover B by James Stokoe as expected provides awesome detail. Godzilla’s face looks a little off, but nonetheless it’s a great piece. The best one however has to be the RI by Tadd Galusha. We’ve seen covers of the two monsters before, but this might be their best representation yet. One can see the fury in their faces.

Overall, Godzilla Oblivion #3 is a fun issue. It can’t be called great however, which is due to the mediocre characters. The fight is satisfying however, which is enough for a lot of fans. Those hoping to see the story become compelling though are in for a disappointment.

One thought on “GODZILLA: OBLIVION #3 Review”