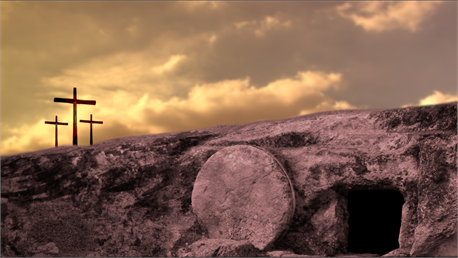 I was at a church in Manhattan last year on Easter. The reason why I bring this up is because the pastor made a statement I found interesting.

He believed that the greatest symbol in Christianity wasn’t the Cross, but the Empty Tomb.

As Easter begins, I can’t help but think about why the Resurrection is the greatest event in the course of history. That’s not to say the Cross isn’t of equal importance, because it is. I think of it as two sides of a coin. Without the Empty Tomb, the Cross wouldn’t matter. And without the Cross, the Tomb wouldn’t matter.

If Jesus never suffered death on the Cross, then His resurrecting wouldn’t mean anything for us today. Likewise, if He had not been resurrected, then the Crucifixion also wouldn’t matter as much. The Death on the Cross is monumental because here was a righteous man, condemned for no justifiable reason. He only did good, yet suffered an agonizing death which every other person deserved. As it says in Romans, “For one will hardly die for a righteous man; though perhaps for the good man someone would dare even to die. But God demonstrates His own love toward us, in that while we were yet sinners, Christ died for us.“ For us today, we see the Cross as a symbol for something we deserved. We can go on saying how great of a people we are but when it comes down to it, are we really all that good? Have we not lied, hated, and lusted at some point? Yet here was Jesus, never doing one of these things, but He was taking the punishment. How unfathomable it is that God would make Himself mortal and die such a painful death, for imperfect human beings!

Before Easter is Good Friday. A person might ask: how is it that a person dying be called a good day? We would find out Sunday. Why is the Resurrection so important and vital to us today? Well, first off any person can die that death. But no human can conquer death. Jesus performed many miracles during his stay on Earth, but none greater than He himself coming back from the dead. Only God has that power. For many, this completely sealed the fact that He was indeed the Bread of Life, God Himself. That’s the first reason, and the second is also very important. His Resurrection means that those whom are children of He will also be resurrected. We too conquer death, because He did. What an awesome revelation!

I like bunnies as much as the next person, but the true meaning of Easter represents so much more. The Old Testament consistently mentions about God’s plan for redeeming humankind through Jesus’ sacrifice on the cross. From the end of the book of John forward the New Testament consistently calls back to it and also the fact that Christ ascended to Heaven. These two events are so important because they give us the greatest thing: salvation. I’m reminded of the verse Hebrews 7:25 as I’m typing this.

“Therefore he is able to save forever those who come to God through him, because he always lives to intercede for them.”

What a great verse to put in our hearts. When we come to God through Christ, he saves us completely. He doesn’t save us partially, no, He saves us 100%. That’s why Easter is a day to be celebrated: Christ died and was resurrected so we could live a meaningful life, which would lead to spending eternity with Him. To accept His gift is the greatest decision a person can make.

One thought on “An Easter Devotional”