It’s amazing to think that it’s been eight years since Cloverfield. If the Blair Witch Project was the film that popularized the found footage genre, Cloverfield is the one which perfected it. The best thing about it was that it put the viewer directly in the action. It felt like we were there experiencing an attack from a giant monster. A sequel has been talked about briefly over the years since. The way it was always mentioned however made it seem like it would probably never happen.

Then 10 Cloverfield Lane popped up out of nowhere.

Immense credit has to be given to Bad Robot for keeping this film literally a secret. It was announced with that title just a few months ago officially. Obviously the most hyped aspect was that middle name. Fans of the original have been hoping for a followup. (After all, the after-credits sequence there revealed that the monster “is still alive.”) Interestingly, Producer J.J. Abrams didn’t use the word sequel to describe Lane, instead calling it a “blood relative.” What that meant wouldn’t really be discovered until opening day, since everything was kept quiet. So, what have we got? 10 Cloverfield Lane is a well acted, well written story. If you’ve never seen the previous film, great, this will be a stellar experience for you. If you’re like me and you have, there’s a big disappointment factor accompanying the well done nature of the plot.

The opening of any story has the ability to draw a person in. The intro here is definitely one of the best I’ve seen in awhile. The only negative I have with it is the very beginning. Michelle apparently is driving out of New Orleans. The city however looked like a barren wasteland out of I Am Legend. It seems like the apocalypse happened, not a blackout as the radio stated. After that is when the good part of the intro comes. Car crashes are frightening, and the way the film uses it is effective. The sudden cuts to the logo was very well utilized. After that the story begins where all the trailers center: the bunker.

First, great credit should be given to Mary Elizabeth Winstead for the portrayal of a character waking up trapped in a jail-like setting. We can see the peril on her face. It’s the little things like her hands trembling as she tries to dial her phone which provide a legitimate feel to the scene. We’re then introduced to John Goodman’s character, Howard. The film does a good job keeping the viewer on edge with this guy. Is he crazy? Is he really trying to help? The story does solid work in slowly unraveling this mystery. Rarely seen in the trailers is John Gallagher, Jr’s character, Emmet. He provides the comic relief in a rather grim situation. I suppose he could be this film’s version of Hud from the original Cloverfield. Emmet wasn’t as greatly written as the other two main characters, but still not bad.

As a thriller, the film moves at a solid pace. The first half was excellent. In a way however, it can feel like one large setup. The main thing is that by the halfway point when the lyrical music started to play I couldn’t help but feel that something should be happening. If the film was going to relate itself to Cloverfield, then there had to be some kind of monstrous presence by that point. Viewers of the original movie is there waiting for that “big thing” to happen. And just when something appears to happen, (classic rumbling tease) nothing really comes out of it. This leads to the main disappointment: the film has nothing to do with Cloverfield.

Interestingly, Lane had started out with having nothing to do with Cloverfield. Then Bad Robot/J.J. Abrams entered the picture and decided to align the film with the monster movie. This was a mistake. According to Abrams, “You have to have an idea that’s better than what people think they want to see to make a movie.” So this is apparently a better idea than a followup? He goes on to say the film has a connection to the original in “DNA,” which further gives an illusion that while maybe not a direct sequel, it could still be part of that movie. It’s not.  There were so many fan theories which resulted from the trailers with the reason why the characters were all in a bunker. Some theorized that it could be due to the 2008 monster making its way there or more nuclear strikes on the creature. This would have made great sense and satisfied watchers of the original. Instead, it seems like the Cloverfield name was only put there to attract viewers, which is a true shame and crime to fans.

Based on the mysterious nature of the marketing and trailers, the final act was going to be quite the surprising outcome. It’s so unexpected that it feels like we’re watching another film. It wouldn’t be a stretch to call 10 Cloverfield Lane a longer Twilight Zone episode. Ironically, this would have been better as the new Twilight Zone movie rather than a so-called relative to the 2008 film. The soundtrack is very solid throughout. Almost of the perilous scenes are given greater intensity. 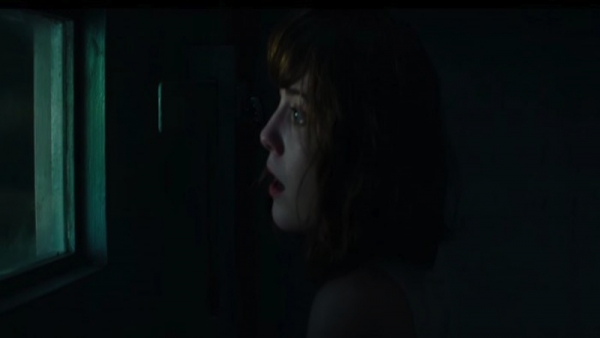 Overall, 10 Cloverfield Lane is a well done thriller and a solid first outing for Director Dan Trachtenberg. The mystery keeps the viewer intrigued as it throws clues and twists to keep he/she guessing. The concept of waking up and being in a bunker after a supposed fallout of some kind is a great setup. Michelle is a likable focus, and Howard is intriguing to watch as we try to understand his motives. Unfortunately, the out of left field final act doesn’t satisfy the “Cloverfield” name, and felt like it was there just to have something unexpected happen. All throughout marketing it has been said it’s not a sequel, but still related. The thing is that it’s not and no one should pretend it is. It’s fine as a standalone film, not as something many have waited 8 years to see come to fruition. It would have been better if it had stuck to its original name, The Cellar.